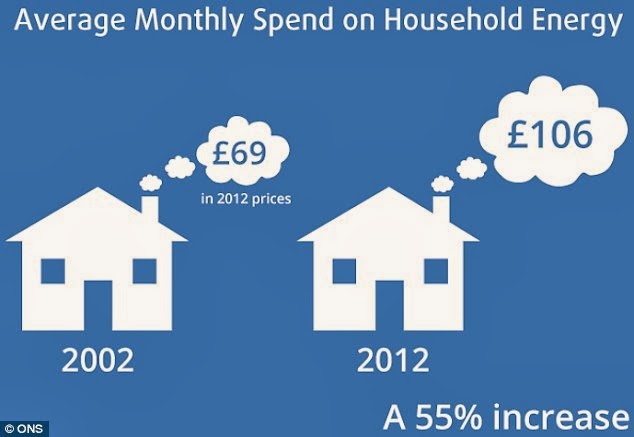 #Debtline blog: Office of National Statics has shown  the true extent of the rising costs of household energy bills that Britons have faced between 2002 and 2012.

Measured in today's prices, households spent £69 on energy every month in 2002. A decade later this had risen to £106 that is a massive  55 per cent rise. Rising bills combined with muted wage growth mean households spent the equivalent of 5.1 per cent of their income on household energy in 2012, up from 3.3 per cent in 2002 - a rise of 54 per cent.
Strikingly, households actually cut back on the amount of energy they used over the same period.

Energy use fell by 17 per cent over the decade as households reduced their energy consumption to save money and through improved energy efficiency.

A recent survey from Citizens Advice revealed 20 per cent of Britons have trouble keeping up with household bill payments and a further 32 per cent occasionally struggle to pay bills on time.
The poorest households suffered the biggest increases. The poorest fifth of households spent 11 per cent of their income on energy in 2012, up from eight per cent in 2002.

Are you struggling to meet basic living costs, need help with energy debt or other credit debts contact Twinpier